One of the most reputable YouTube channels for conducting these tests is PBKreviews and as the Galaxy S22 Ultra starts making its way to more consumers and third-party review channels and sites, it’s likely that this phone is going through a massive amount of torture, just to test the Its hardness and ability to deal with incoming errors and potential disasters.

First, the PBKreviews channel video starts by submerging the phone in water for a full minute, the screen is on and has not displayed any alert sign, warning messages, or even any message indicating that something is wrong while in the water.

So does this mean that the phone has absolutely no problem in this case? After pulling the phone out of the water, it continued to work very normally, which is very good news for the owners of the phone, who have pre-ordered it and are waiting for it to arrive.

We already know that the Galaxy S22 Ultra has a water and dust resistance rating of IP68, which means it qualifies for 30 minutes of submersion in water at a depth of 1.5 metres.

But we never advise you to do something like this just to test the phone especially since we are all sure that water is the number one enemy of electronic and electrical devices.

But at the same time, the Galaxy S22 Ultra outperformed this test and it has good news, which is that the phone is very easy to use in heavy rain or you may not have any problem if you accidentally drop it in the toilet or pool.

As for the scratch and scrape test, the results are very interesting. The standard Galaxy S22 outperformed the flagship Galaxy S22 Ultra. The Standard Edition was able to withstand scratches up to level 8, while the Ultra version started showing scratches at level 6. 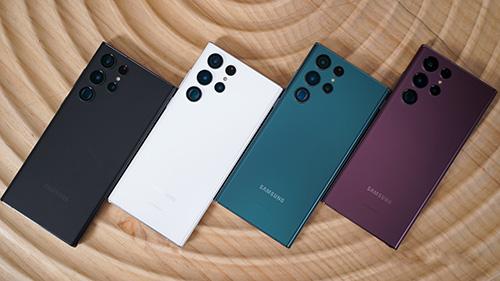 The reviewer tried to re-review more than once to ensure that his results are correct, and indeed it was confirmed that the standard Galasy S22 is better than the Ultra in the scratch test.

This is very good news considering that these tests are rigorous and use sharp scraping tools that should affect the appearance of any phone, no matter how tough it is.

Samsung used Gorilla Glass Victus Plus on both the front and back, which definitely protects these phones from many catastrophic scenarios.

Report – iPhone 14 phones will come without a traditional SIM!